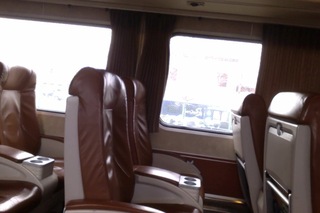 Empty Seats, Where the Cool Kids Aren't
I'm on the train, passing Longview, WA, across river from the former nuclear site where I was once arrested for protesting (the actual charge was a misdemeanor form of trespassing). As so often happens, I wasn't fully attentive and got on the wrong car and had to be shooed from my seat by the rightful ticket holder. As I made my way back to Car 2 I couldn't help but notice a lot of writers, some of them famous, were in that first car while the second car was nearly empty. At first I felt bad, like I was missing out on being with the cool kids, but I got over it and opened a file to work on an essay-in-progress. My goal for this trip is to push through the writers block I've been stuck in and finish up the projects that are close to being finished so I can begin something new.

I'm taking a short break now to think about the idea of a "Story on Rails"--a term writers use to talk about stories that start at Point A and go straight to Point B without derailment. A Story on Rails isn't a bad thing, it just lacks a bit of the excitement and surprise that many readers want from reading fiction. And thinking about story derailment has got me thinking that my essay needs to veer from the course, which is a bit of a revelation I hope will help me move it forward.

This is my first blog post and I don't know what the focus (if any) will be. Will I be a blog on rails or will I embrace the unexpected detours?
3 Comments

I couldn't resist the "Be the first to comment" link. Embrace the unexpected detours! Isn't it a little hard to stay on track from Point A to Point B when there is no direction from Point A? Just thinking out loud.

I'm thinking there's always a direction, even if metaphysical.

There IS always a direction, and I really like (yeah, where IS the like button, anyway) that all points in the Universe are then Point B. Until you choose, I suppose.